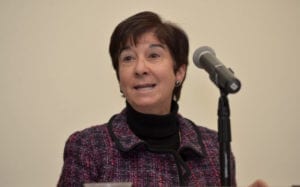 The theme of the session was “Understanding end-to-end Marketing Technology Enablement”, the first of four MarTech SIGS to be conducted this year.

The group of over 20 attendees was led by Marianne Hewitt, Growth Strategist and Marketing Technologist with The Growth Strategy Group.  Marketers’ budgets and priorities for 2017 were presented, MarTech was defined and its scope was discussed and, most importantly, the group was surveyed for preferred topics in the 3 remaining SIGS in 2017.

as the highest priority topics of interest for future meetings.

The date for the next SIG will be announced shortly and will be held during May or June.

Chicago AMA introduced Charley Orwig as Director of SIGs at this event.

Selected by a law firm that specializes in developing global legal strategies for its clients. It differentiates itself through the use of Design Thinking techniques to develop these strategies. Its clients represent multiple large constituencies. I was engaged to lead the development of its 2020 Communication program to increase awareness and reach of its service. Communications are unique to personas. Personas were identified and messaging developed specific to the interests of that persona. A channel strategy was developed, and a 2020 cadence developed and readied for execution. Channels were refined to include those most relevant to the personas. KPIs were established to measure top of funnel improvements.

Partnered with this client to launch its first multi-touch, cross channel marketing program to welcome new clients in a programmatic series of interactions over the first 90 days of the new relationship based on journey maps. The objectives of the program were to drive greater long-term engagement, educate the client about financial advisory resources and online capabilities available to them, promote IRA consolidations, and drive interaction to lower cost channels when appropriate. The program was designed to increase assets under management substantially through a series of eight touch points tailored to high value/potential value segments and conducted over direct mail, email, inbound call center, outbound inside sales, web and banner.

Customer Experience and Next Best Action

Phase I: Partnered with client for a strategic initiative to frame the business architecture for a multi-year cross channel offer optimization initiative that will reduce bank’s reliance on low yielding outbound tactics. Developed requirements to support the business architecture. Recommended external vendor solutions. Developed short term roadmap to determine evaluation of solutions for them to support optimized and customized interactions with clients across channels.

Phase II: Collaborated with client to envision and plan the next generation of their Customer Management Process with an increased level of scope and sophistication for additional lift. The future customer environment will include inbound and outbound interactions across lines of business and channels. Offer orchestration will be extended to all phases of the customer life cycle and will be informed by digital interactions including geo targeting.

Led the marketing work stream for the launch of a digital bank. Facilitated development of the bank’s value proposition with its messaging hierarchy. Oversaw development of the product mix and sales and profitability forecasts. Managed design of contact and messaging strategy with supporting outbound and inbound campaigns. Managed creative agency and collateral development. Deposits exceeded expectations prior to launch due to viral marketing.

Led client in assessment of its ability to increase revenue and products per customer through a cross sell initiative to be implemented across eight of its business units using salesforce.com. New roles and responsibilities, processes and implementation of salesforce.com were components of this enterprise wide priority. Quarterly goals and objectives for cross sell transformation were set and a ten month plan to guide adoption and culture change was developed. The cornerstone of the effort is built on benefits realization and measured through a cross sell scorecard, baseline of current performance and plan to collect and monitor metrics going forward.

Conducted innovation engagement with global transaction services market leader to address poor customer experience. While global scale was an asset for this organization, it was also a liability. The customer experience was disjointed. The organization was internally focused. The goal of the effort was to envision a future that engendered client trust and presented this institution as reliable and consistent. The theme was think “Bold, Outrageous, and Create don’t imitate”.

Led client through assessment of abilities to effectively plan and execute quarterly segment marketing programs for process, operational, and technical improvements. With particular focus on enhancing lead management capabilities to include event based marketing, cross sell using existing inbound and online channels, and referrals, a series of recommendations were made to create a process and technology environment to enhance sales and profitability. Achievement of process milestones was improved by 95% in less than one year.

Prepared the process foundation for the launch of this institution’s new product launch to acquire client assets and provide liquidity in the mortgage market. This end-to-end process definition was used as a key component to demonstrate controls and command of the risks involved in product launch in order to receive board approval. The end-to-end process included evaluation of client and asset quality, onboarding, settlement, custody, loan servicing, quality control, accounting, reporting and risk (credit, market, operational) management.

Advised a leading pharmaceutical company for a large and complex sales transformation initiative with impact on 4,000 field sales representatives.  Program was designed to:

Led the design and planning of multi-year implementation roadmap for operationalizing a new segmentation strategy for this organization’s B:B:C business. The segmentation provides needs based solutions across the customer life cycle and were tailored to personas based on combinations of life stage and customer assets. The initiative is driving operating models, and client acquisition and service strategies that are tailored to customer life stages.